The Park is prominently visited due to the Mountain Gorillas which inhabit the thick vegetation forest of the Park as well as the Golden Monkeys that are fond of playing and jumping within the tree branches and the 5 virunga Volcanoes i.e Mount Karisimbi Volcano, Mount Bisoke Volcano, Mount Muhabura Volcano, Mount

The Park neighbors the prominent Musanze Caves, Iby’iwachu Cultural Village and travelers can visit the Dian Fossey Tomb as well as the Karisoke Research Center where they will learn more about the life of the prominent Primatologist Dian Fossey.
They will be inspired by her works for she sacrificed her life to save that of the Mountain Gorillas which were hunted for bush meat, barter trade etc at the time.

The Vegetation Terrain of the Park varies according to the altitude and this includes; Montane Forest between 2400 and 2500 meters, Bamboo Forest which covers 30% of the Park and grassland ranging from 4300 to 4500. Marshes, Meadows, Swamps, Thicket also cover a candid area. 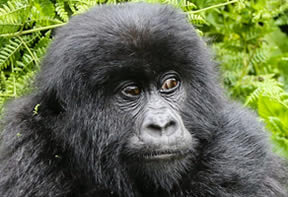 The Park inhabits the rare species of Mountain Gorilla which are tracked here in the Park as well as the Golden Monkeys in the thick green forest vegetation. Other Wildlife species can be spotted in the forest as well and these include; black-fronted duiker, buffalo, spotted hyena, bushbuck and various bird species.

Activities to Do at Volcanoes National Park Rwanda

Gorilla trekking at Volcanoes National Park is the most prominent Safari activity carried out and this requires you to transfer to the headquarters with your valid Gorilla Trekking Permit at US $1500 and when you reach here, you will be briefed on the Dos and Don’ts around the Mountain Gorillas in their natural forest vegetation habitat.

In groups of 8, you will transfer to penetrate the forest with a skilled ranger guide to track the Gorillas for a period of 3-5 hours and when you meet them, only an hour is allowed to stay in their presence taking numerous photos to keep for memories.

Bird watching is also another safari activity travelers especially birders around the world can enjoy. This requires transferring with a skilled birding guide who will inform you about the various bird species that inhabit the green forest vegetation.

The Bird species you will spot in the Park are both endemic and migratory and these include; handsome francolin, Great Rwenzori turaco, Archer’s ground robin, Red-faced woodland warbler , dusky crimson-wing, Rwenzori double collared sunbird, Collared apalis, Rwenzori batis and the strange weaver.

Golden Monkey Tracking is another Safari activity to take on while on Tour in Volcanoes National Park and it offers you views at the stunning orange colored Golden Monkeys in their natural forest vegetation habitat. You will track these in groups for a period of 2-4 hours and when you meet them, you will take numerous photos of them playing, jumping and communicating with in the tree branches. You will transfer with a skilled ranger guide through the forest and you will spot other small wildlife and primates i.e vervet monkeys, blue monkeys etc.

Hiking and Nature Walks is another exciting safari activity carried out in the Park and this offers views at the stunning green vegetation, bird species as well as small wildlife mammals. The Hikes/ Trails include;

This is the shortest trek/ hike in Volcanoes National Park and this transfer to a candid, shallow crater lake at the base of the prominent Mount Bisoke Volcano. Transfer with a Ranger guide watching numerous bird species and monkeys en-route. You will also have stunning clear views at the Virunga Volcanoes in the park.

The hike to Mount Bisoke Volcano is one of the popular hikes taken on in Volcanoes National Park and this is very challenging although rewarding. You will transfer along the Volcano and when you reach the top, you will view the beautiful Crater Lake. The Hike will take you a period of 3-5 hours and en-route, you will spot beautiful green vegetation, bird species, small wildlife animals.

The trek/ hike to the beautiful Russumo Falls is very remarkable as it will offer you stunning views at the green vegetation habitat en-route then later, you will reach the stunning waterfalls and the birds you will spot here include; Long-crested Eagle, African Marsh Harrier, Stonechat, Plain Martin, Cinnamon-breasted Bee-eater, White-tailed, Grey-throated Tit, Paradise Flycatchers, Pink-backed Pelican, Common Moorhen.

The Musanze Caves are located just a few kilometers outside Volcanoes National Park and are a very fascinating Destination to visit due to the history that lies behind since the ancient days. The Hike will require you to move a distance of 2 kilometers viewing verdant green vegetation and when you reach there, you will view various bats hanging inside the Caves.