A small zoological and forest reserve was established around Mount Kahuzi in 1937. A larger Kahuzi-Biega National Park was established in 1970. The park became a World Heritage Site in 1980 to protect 200-300 eastern lowland (Grauer's) gorilla occurring mainly in the forests at 2,100-2,400 m, but also in the lower rain forest. The 'mosaic' of biotypes makes the park an excellent gorilla habitat. Other primates include eastern chimpanzee, and numerous Cercopithecinae and Colobinae. Other mammals include elephant, forest hog and many antelope and duiker. Avifauna includes the endemic Rockefeller's sun bird, Grauer's broadbill, Grauer's warbler and Shelley's crimsonwing.

The 75,000 ha eastern sector is entirely montane. The massif is part of the Mitumba Mountain range, the western mountains of the Great Rift Valley. The two main peaks, Mount Kahuzi (3,308 m) and Mount Biéga (2,790 m) are extinct volcanoes, and the massif dates from the late Tertiary or early Quaternary.

The park is absolutely gorgeous and the gorilla experience is simply superb. In general the area from Bukavu to KBNP is secured by several MONUSCO posts. In summary, stay with, listen to and follow the advice of the KBNP park rangers and you should be at least as secure as you would be in many major cities around the world.

Kahuzi-Biega National Park operated by the Institut Congolais Pour La Conservation de la Nature (ICCN) is a World Heritage Site. Kahuzi-Biega National Park is famous as the largest refuge of the highly endangered Eastern Lowland (Grauer's) Gorillas and lwiro chimpanzee sanctuary . The last census of the gorillas in 2013 counted only 145 individuals. The highland section with most of the gorillas is open for visits, with three gorilla groups habituated for visitation.

The park is home to some of the last remaining populations of Eastern lowland gorillas in the wild. There were an estimated 600 living in the park in 1990, but there are only believed to be a couple hundred still alive after the tumultuous fighting of the 1990s and 2000s. In comparison to the western lowland gorillas, with a population of over 100,000 in Congo-Brazzaville, the total population of eastern lowland gorillas numbers at less than 4,000. They're also not to be confused with the mountain gorillas sought by tourists in Rwanda, Uganda, and Virunga National Park. The Eastern Lowland Gorilla is noteworthy for being larger than their western counterparts or mountain gorillas. They are the largest known primates, measuring in at 1.76 m (5 ft 9 in) for males and 1.60 m (5 ft 3 in) for females.

Mountain ascents The summit of Mount Kahuzi (3308 m) offers great views of Bukavu and Lake Kivu. The ascent takes 4 hours through bamboo forests and sub alpine vegetation. The descent is approximately 3 hours. The summit of Mount Bugulumiza (2400 m) is easily accessible via a 6 km trail from Tshivanga Visitor Centre and takes about 3 hours round-trip. The summit offers great views of Mounts Kahuzi & Biega along with the surrounding forest landscape. The summit of Mount Biega (2790 m) is a 6-hour round-trip hike from the main road. The vegetation is significantly different from that found on Mount Kahuzi. The park is currently working to clear a trail to the summit that was hoped to open back in 201 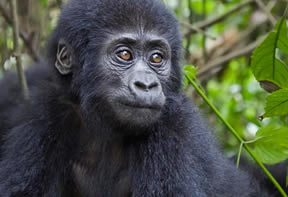 Pan an exploratory gorilla safari to visit the mountain gorillas in Virunga national park, get the gorilla permit included in your budget congo safari tour with Cheap Uganda Safaris. 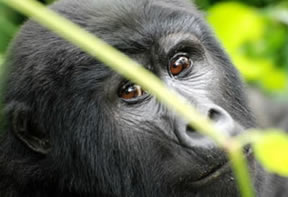 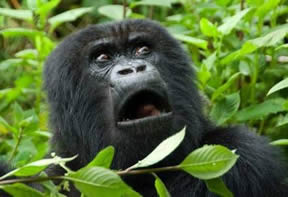